Watercolorist – a man who tames the elements

The Artist of Art for People wrote in her application that she uses a painting technique considered to be one of the most difficult. She meant the watercolor, which for the uninitiated can only be associated with art classes in elementary school. So I decided to delve into the secrets of handling water on paper and share my observations. Read on and see if you are convinced by the painting effect achieved with watercolors.

The painting technique called watercolor owes its name to the Latin word aqua, meaning water. In the sense of this word, there is also one of the main components of the paint dedicated to watercolors. The medium is a water suspension of pigments and a water-soluble glue (e.g. gum arabic, Kordofan gum), which the Artist places on a paper support with a brush. The composition of such paint determines not very strong coverage, so the Artist repeats the brush strokes in one place many times to obtain the desired effect. The difficulty of this painting technique is mainly due to the very limited possibilities of making corrections. Retouching, painting or removing an unwanted stain are almost impossible here. An interesting fact is that the use of white pigment by watercolors is rare, and the effect of white is obtained mainly by leaving the background in its originally unpainted bright parts.
When starting your adventure with watercolors, it is also worth knowing that the paints are available in many packaging options (tube, cube, bottle), which affect their consistency, and thus the guidance on paper and purpose. The choice of paper with appropriate absorbency and weight, as well as a soft brush made of natural materials, will be of great importance for the final result. When looking at paintings with the use of water paint, one gets the impression that they are extremely subtle, reflective and magical in its own way. This result is certainly enhanced by the pastel colors of the works, as well as the blur effect, which creates a nostalgic mood.

Art that came out of the cave

Although works with the use of water-based paints were already known in Palaeolica, it was only Chinese art that popularized and dominated this topic for several centuries. The artists of ancient Egypt and Rome were equally eager to paint on paper. On the other hand, in modern Europe, thanks to the famous “Young Hare” by Dürer, it is common to make botanical and animal illustrations using this method. But it was the eighteenth century that elevated technology to the national name. Travel journals, documentary works and book illustrations. This is the golden age of watercolor, with its illustrious representative William Turner. Albrecht Dürer, Antoon van Dyck, William Blake, Eugène Delacroix and Juliusz Kossak were also among the outstanding artists. Certainly one of the leading Polish watercolors was Julian Fałat, who chose this technique solely for economic reasons. With time, however, he gained such proficiency in it, which allowed him not only to appear in the artistic world, but also to permanently enter the pages of Polish and world art history. The watercolor also captivated the great representatives of different painting techniques. Among them appear Vincent van Gogh, Wassily Kandinsky, Paul Klee and Leon Wyczółkowski. The contemporary generation of watercolors pays tribute to tradition, reaching for the subject of landscapes, especially rural landscapes, with great enthusiasm. Monika Bielat-Sobiczewska sentimentally evokes an old hut, forgotten scarecrows or wild flowers. Marta Ciućka, showing the sea landscape or a galloping horse, plays with non-literalism and prompts us to tell her own story. Just like Krzysiek Grabara, whose inspirations from the philosophy of the East translate into the reflective tone of the works, naturally drawing the viewer’s attention to his emotions. 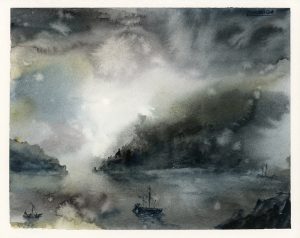 “Watercolor is my love,” says Monika Bielat-Sobiczewska. Is yours too?

Emotions poured out. The use of epoxy resin in art

The resin has always fascinated. To start with children who love to squeeze their little fingers into shiny drops on a tree that is seductive with scent and color. The same – adults, who with…

What do you know about batik?

Are you curious about the effect of painting on fabric? You probably imagine beautiful, multi-colored flowers or ethnic patterns. What if the Artist creates a painting on a delicate, airy surface? In our article you…

A matched gift is a great art

You have to keep a great distance to yourself and your own expectations to be able to react properly to a surprise gift. But a much greater art is the ability to make someone happy with…

The greats of this world are put on paintings as eagerly as ordinary people are. The artists simply liked to observe them. Depending on the times when painters worked and the circumstances in which they…